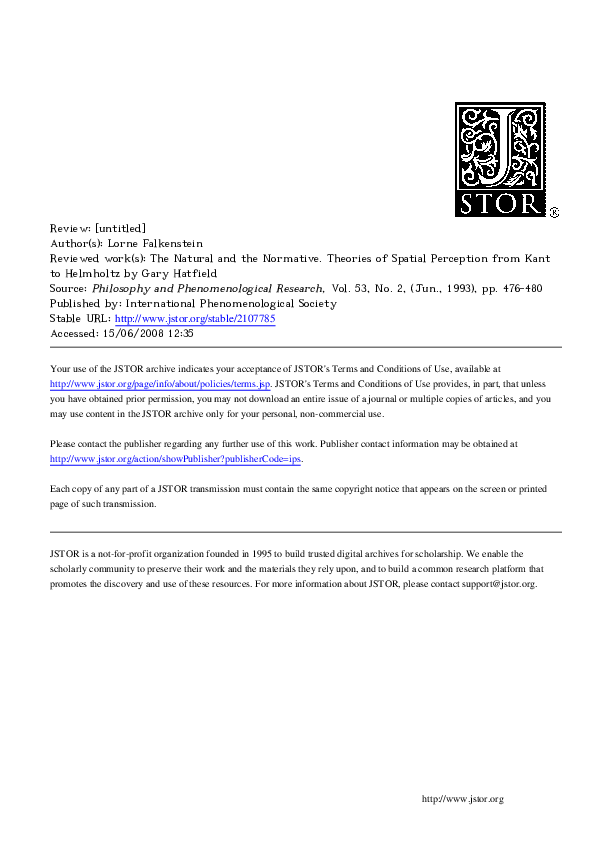 
Gary Hatfield's essays address fundamental questions concerning, in Part I, the psychological processes underlying spatial perception and perception of objects; in Part II, psychological theories and metaphysical controversies about color perception and qualia; and, in Part III, the history and philosophy of theories of vision, including methodological controversies surrounding introspection and involving the relations between psychology and the fields of neuroscience and cognitive science.

An introductory chapter provides a unified overview; an extensive reference list rounds out the volume. His works include experimental studies of shape constancy, theoretical papers on perception, and philosophical studies of the fundamental concepts and theories of visual perception and cognition and their history.

His work in the history and philosophy of psychology extends from the seventeenth century to current controversies on qualia and perceptual representation.


He is the co-founder of the Visual Studies undergraduate program at the University of Pennsylvania and has co-taught, with psychologists and art historians, courses and seminars on all aspects of visual perception. Early sensory areas mostly reflect the unisensory evidence corresponding to segregated representations, posterior parietal regions reflect the fused spatial estimate, and more anterior parietal regions reflect the overall causal inference estimate.

This distributed pattern of sensory representations demonstrates the progression of causal inference computations along the cortical hierarchy. Again, its success in describing human perception suggests that this Bayesian model could also provide a framework to map the underlying neural processes onto distinct sensory computations.

For example, an important question is whether the same or distinct brain regions reflect the integration process and the causal inference computation. This is precisely what the study by Rohe and Noppeney addressed. In their study, participants localized audiovisual signals that varied in spatial discrepancy and visual reliability while their brain activity was measured using functional magnetic resonance imaging fMRI. The authors first fit the causal inference model to the perceptual data, which enabled them to investigate the mapping between brain activity and the different spatial estimates predicted by the model; the estimates were predicted by either unisensory input corresponding to the distinct causal origins hypothesis , by the fusion of the two sensations corresponding to the single causal origin hypothesis , or by the causal inference model the weighted combination of fusion and segregation.

Addressing this question required an additional step of data analysis: linking the selectivity to spatial information reflected in distributed patterns of fMRI activity to the spatial estimates predicted by each model component. Luckily, methods of decoding analysis provide a means to establish such a link [ 20 ] and allowed the authors to associate each brain region of interest with the best-matching sensory estimate predicted by the inference model.

As may be expected, some regions early visual and auditory cortices predominantly reflected the unisensory inputs and hence were only a little affected by any multisensory computation see Fig. Other regions, e. Thus, in these regions, automatic integration processes seem to occur that merge the spatial evidence provided by different modalities, weighted by their reliability, but regardless of how likely it is that these relate to the same object. And finally, regions more anterior in the intraparietal sulcus encoded the spatial estimate as predicted by the causal inference model, hence adapting their sensory representation based on the likely causal origin.

Overall, the new results show that different neural processes along the sensory pathways reflect distinct estimates about the localization of sensory events. Some estimates seem to arise mostly in a simple unisensory manner, while others exhibit the computationally complex nature required for causal inference. In addition, they suggest that sensory fusion and causal inference, at least in the context of spatial perception, are distributed processes not necessarily occurring in the same regions.

The data support both the traditional notion that multisensory perception is mostly implemented by higher-level association regions and the more recent notion that early sensory regions also participate in multisensory encoding [ 21 , 22 ]. Most importantly, however, they show how model-driven neuroimaging studies allow us to map complex sensory operations such as causal inference onto the sensory hierarchies. Rather, multisensory perception arises from the interplay of many processes and a network of interacting regions that implement these, each possibly relying on a different assumption about the causal structure of the environment and implementing a different sensory computation.

Ultimately, it may be impossible to fully understand localized multisensory processes without considering them in the big picture of a possibly hierarchical but certainly distributed organization. As with any major step forward, the results pose many new questions.

It will also be important to see whether there are brain regions generically involved in multisensory inference and not specific to spatial attributes. Furthermore, it seems natural to look for similar gradual changes in multisensory computations along other sensory pathways. For example, our understanding of auditory pathways may benefit from such model-based decoding studies [ 24 ].

Disentangling the impact of attention and task nature on multisensory encoding and what can actually be measured using neuroimaging signals remains a challenge for the future.

Neuroimaging studies provide critical insights into the large-scale organization of perception, but the underlying local mechanisms of neural population coding remain to be confirmed. Signatures of multisensory encoding at the single neuron level can be subtle [ 27 ], and the mixed selectivity of higher-level sensory regions can render the link between neural populations and neuroimaging ambiguous [ 28 ]. Again model-driven approaches may help, for example, by providing testable hypothesis about large-scale population codes that can be extracted from electrophysiological recordings or neuroimaging [ 14 ].

On a methodological side, recent work has shown how combining fMRI with probabilistic models of cognition can be a very powerful tool for understanding brain function [ 29 , 30 ].


In line with this, Rohe and Noppeney show that the combination of statistical models of perception and brain decoding has the power to enlighten our understanding of perception far beyond more descriptive approaches. Yet, studies such as this require carefully crafted models and efficient paradigms to overcome the poor signal-to-noise ratio sometimes offered by neuroimaging. Abstract At any given moment, our brain processes multiple inputs from its different sensory modalities vision, hearing, touch, etc. Introduction Our brain is continuously faced with a plethora of sensory inputs impinging on our senses.

Mapping Causal Inference onto Sensory Pathways In their study, participants localized audiovisual signals that varied in spatial discrepancy and visual reliability while their brain activity was measured using functional magnetic resonance imaging fMRI. Conclusions As with any major step forward, the results pose many new questions. References 1. It furthers the University's objective of excellence in research, scholarship, and education by publishing worldwide. Sign In or Create an Account. Sign In.